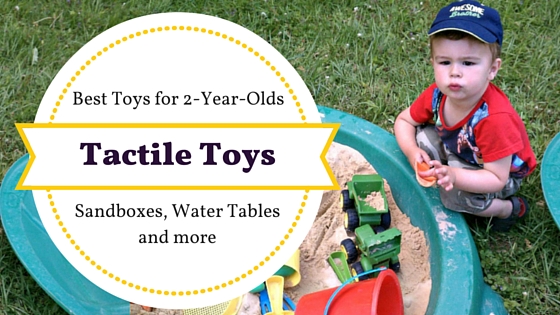 Toddlers love to explore the world with their hands, and you can help them do it in style with one of these classic toys.

Sure, they can be a little messy — but that’s your life with a 2-year-old anyway, right?

This site contains affiliate links. That means I get a small commission if you end up buying something as a result of seeing it here.

Our 2-year-old’s sandbox, an older model of this Little Tikes turtle, was a hand-me-down from a friend. We were pretty excited, thinking it would lure him away from a patch of what used to be landscaped mulch that his diggers and shovels had turned into a dusty dirt patch.

Frankly, he still prefers actual mud and dirt to sand, but his sandbox is still a big hit, even now that he’s 3. All in all, he has probably only spent more time playing in one other place: the train table.

I’d suggest getting a sandbox with a cover, like the one shown here. (If you ever played in an open sandbox as a kid and discovered a sandy cat turd surprise, you’ll need no more persuasion.) I’m also partial to the sandboxes that lie on the ground, as opposed to sand tables, because kids inevitably want to sit and lie in them. Look for a sandbox that has built-in seating like this sandbox, also from Step2.

Many a day when I was at my wit’s end with my 2-year-old and had to step away to give myself some space, he would use his freedom to stand on his little step stool in the bathroom and splash in the running water from the sink. I’d pretend not to notice as he got the entire room wet while I stealthily watched an adult sitcom for 15 minutes to regain a sunnier outlook on life.

Yes, 15 minutes – that’s a very long time for a 2-year-old. He’d watch how the water flowed over his various trucks and toys, and find other things to pour, scoop, and absorb it.

If you’re not into letting your kid run up your water bill and soak your bathroom, check out one of these water tables (sometimes described as “sensory tables”). The one shown here got great reviews, or this Step2 Splash and Scoop Bay actually has areas for sand AND water (as if they won’t be immediately combined into one sloppy mess – but still, it looks fun).

These tables can also be used with other tactile activities made from common household items and kitchen tools; here’s a cool list that I wish I would have tried when mine was a little younger.

None of the fun squishy stuff you find for kids is going to say it’s OK for anyone under 3, because some 2-year-olds are definitely going to try to eat it. If you’re buying for someone else’s 2-year-old, you should probably hold off for now.

However, if you’re pretty sure your own 2-year-old is past the phase where they eat random stuff, or you’re willing to keep a close eye on them while they play, it can be a great activity. My 2-year-old loved playing with play dough, mostly as pretend mud for his vehicles to “get stuck” in. (Many pretend tow trucks were called as a result.)

I used this recipe to make play dough a few times during my son’s second year. The biggest problem with play dough (including the official branded Play Doh) is that it dries out and leaves crumbs everywhere eventually, and if you forget to put it back in a sealed container, it doesn’t take long.

That’s why I was pretty pumped to find Kinetic Sand on clearance at Michael’s. Kinetic Sand is mostly made of sand, but includes polymers that make it stick to itself. The original Kinetic Sand is more for stamping shapes and squeezing for fun, but they also have a “Kinetic Sand Build” line that is even sticker and can be used to make blocks, snakes, etc. – more similar to Play Doh. (Here’s a link to a Kinetic Sand Build kit for making pretend cakes.)

This stuff does not dry out. It does get dirty over time as your 2-year-old repeatedly drops it on your not-swept, pet-hair-covered floor (or is that just me?), which makes it a little less sticky and more likely to leave bits of itself behind. It’s also much more expensive than play dough, but I still think it’s worth it to reduce the mess and the guilt that comes with consistently having to throw away the dried-out play dough you accidentally left exposed to the elements.